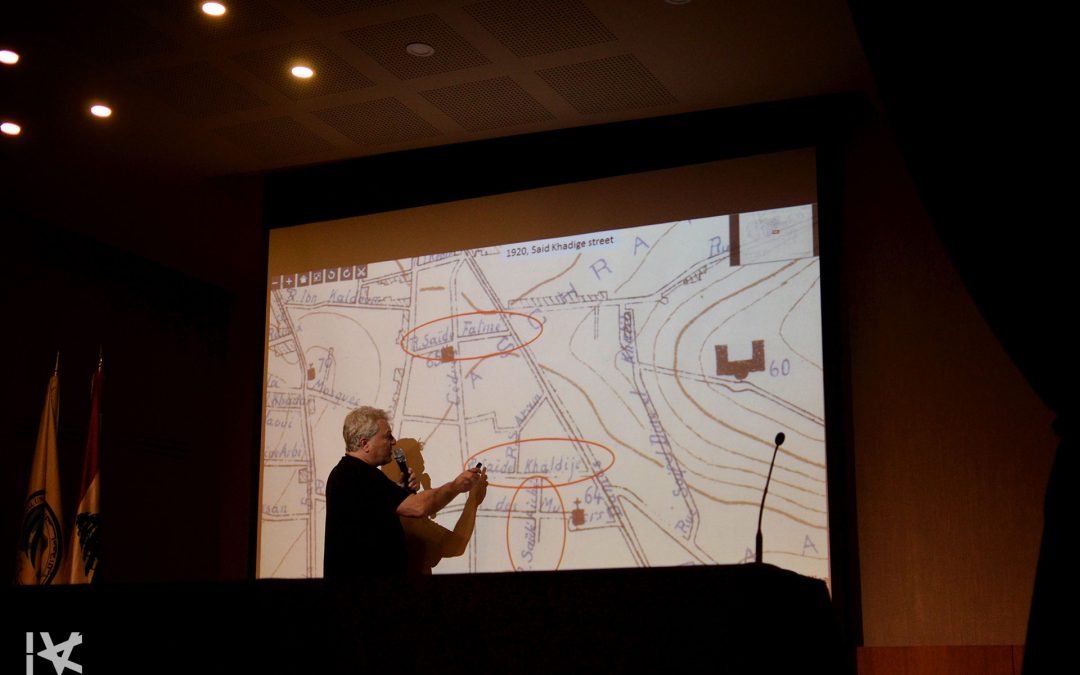 The panel discussion wrapped up later than planned. Instead of moving out, the public stepped forth toward the stage and started small talk with the panelists. It was almost 9 PM, and the amphitheater at the International University of Beirut isn’t used to nocturnal dwellers; but nobody seemed to mind the time. “I’m not supposed to be here this late, my dad’s going to kill me,” giggles Siham. But the student lingers some more on a heated discussion.
It is the launching event of “Beirut, mon Amour”, and all four panelists are here to discuss their individual tokens of love for the city. Mona Hallak, Lina Ezzeddine and Fadi Ghazzaoui are already associated with Beirut through their work on the preservation of heritage; Petra Chami is oficially under the charm.

Amal Bohsali organized and curated “Beirut, mon Amour”. Her background in archeology is obvious in the words she greets the audience with.

“Today, we are not nostalgic of a constructivist history, but we are here to tell unfamiliar stories of a modernized conglomerate of Al Bouyout Al Bayroutia, the streets of Beirut, Beit-Beirut, and people’s legacies. A politicized venture into today’s chaotic and divided capital.”

A member of the Institute of Visual Communication, she attempts to understand the complexity of a city ridden with contradictions through the multidisciplinary conceptual perceptions she selected.

Beit Beirut, Mon Amour, by Mona Hallak
Formerly known as Beit Barakat, the emblematic structure that fascinated Mona in 1994 symbolizes the bygone days, the pre-civil war era. The architect/ activist was appalled by the eradication of the architectural heritage and dedicated herself to its salvation. A tough battle in a country blinded by amnesia, ignorance and corporate greed. It’s the cause she’s been endorsing against odds, people, and a society that doesn’t value architectural heritage or the memory of places. 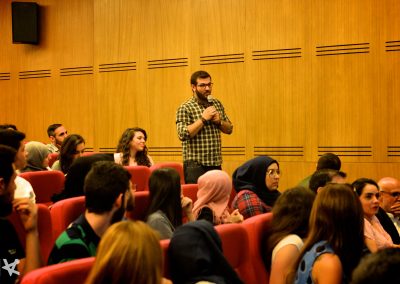 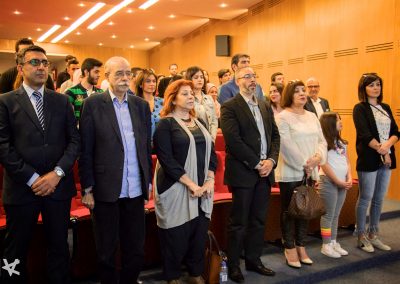 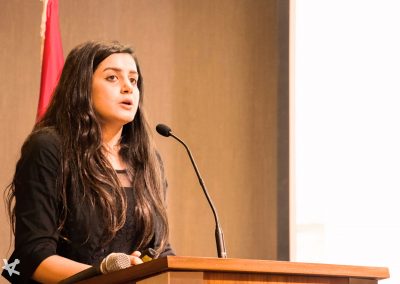 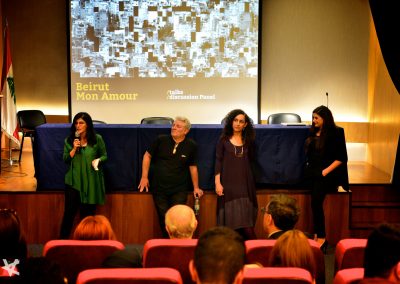 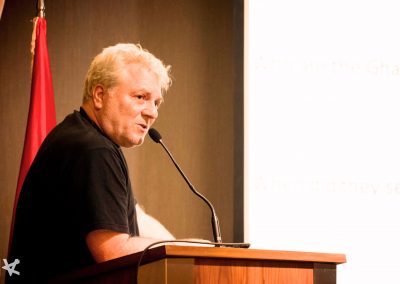 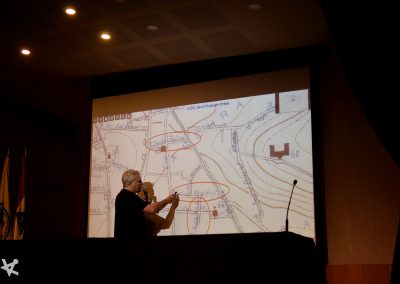 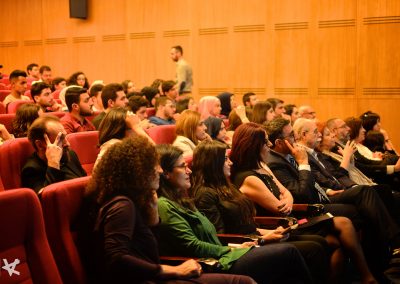 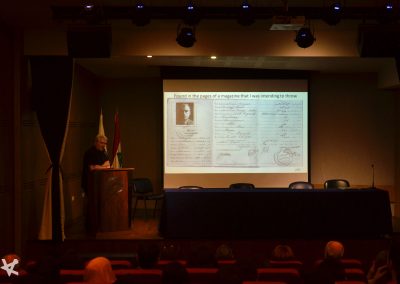 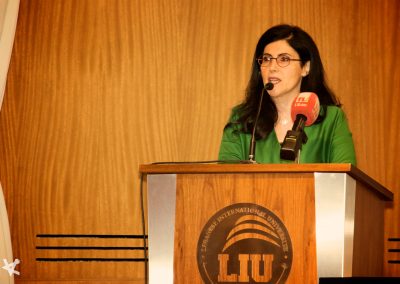 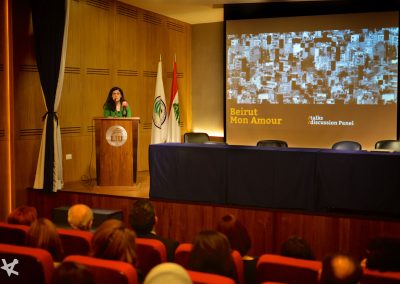 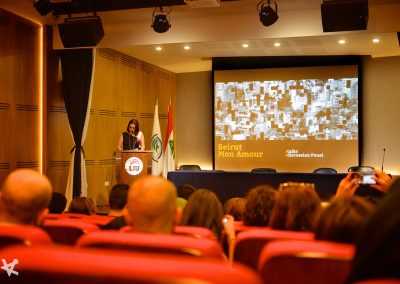 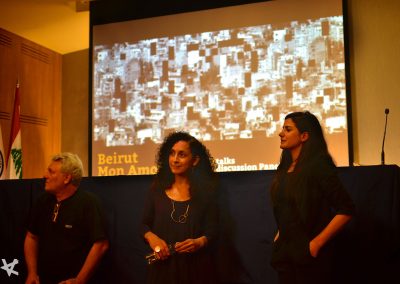 She fought for its preservation and lobbied until it was acquired by the state from its inheritants. 30 years on, it is open and almost functional. On display in its halls now is a collection of anonymous portraits salvaged from Studio Mario, a photographer’s business that used to be on the building’s ground floor. She dreams of a day when it will be managed right, with a clear cultural and educational directive.

Its restoration and later its management may not be aligned with Hallak’s vision and dreams -physically or symbolically, yet her efforts and the fuss she raised around it brought the heritage back to the public debate. Beit Beirut now stands proud –not of the traces of war it carries, but of the different struggles it symbolizes.

Beirut where construction is neither planned nor coordinated, where old buildings are destroyed or left to fall apart, where new buildings lack character and identity, where the streets -ever less green and public- carry meaningless names.

Lina Ezzeddine dwelled on streets names. To her, the people whose names they carry is an aspect of a community and a city’s development – a fraction of history that is written and sometimes later on, unwritten. Ezzeddine holds on to this aspect of folk history, recorded on blue street signs and marked more on maps and addresses than in the popular daily diction and use. She seeks to promulgate this knowledge: Who are the people behind street names? What legacy do they leave us? When were the names given? Why let these names become a mere label, void of its contextual dimension and cultural relevance?

Seeking Beirut, Fadi Ghazzaoui
Ghazzaoui also looks into the history of Beirut’s neighborhoods and families, starting with his own. He’s an advertiser turned-researcher, a documenter who attempts to record aspects of the demography that’s volatile to archive and preserve it for keepsake and retrieval.
He vehemently encourages students in the audience to do the same: “Ask your older family members questions, documents and collect all tokens related to their past as irrelevant as they may seem to you: they are in fact ephemeral time capsules about daily culture.”
Between personal photographic collections, meeting with the elderly, listening to their stories, gathering information and noting all the spoken and written words, his own research turned into a snow ball of information. Soon a book project about Al Bourj and the concept of public space is to see the light.

“Beirut is a city that morphs every 20 years,” he asserts, “so keep recording!”

All three speakers’ work shifted from being a nostalgic lamentation over vestiges to a more realistic and formative venture to do something about the dwindling memory.

Their efforts would yield to collections exhibited or works published, informative guides, books, galleries, collections and other forms of recording and preservation. They also lobbied for reforms of laws and regulations. Some battles were milestone achievements, other battles were lost.

Petra Chami, a graphic design alumnus of the Lebanese International University, was fascinated by the complex visual identity of Beirut: posters, signs, banners and other mediums that shape the city’s visual landscape. But city brands defy logic; they are initially hard to understand, since they’re shaped by the different constituents of the city scape. With the social and historical mediation required, she attempts to deconstruct it.

She quotes Bill Baker from City Branding in yet another indictment of policymakers: “Ambitious cities must proactively shape and influence what the world thinks of them and position and market themselves with strategic intent.”
Bohsali sought to unfamiliarize the familiar beyond mass production of false iconography and nostalgic history of Beirut. The four panelists each contributed by making a sad scape a bit less grim.